A Musical Tour of the Baltic Sea 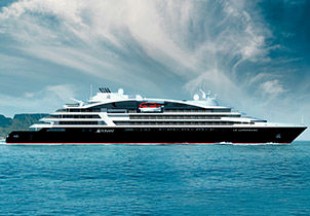 A Musical Tour of the Baltic Sea

In partnership with Radio Classique

PONANT invites you to discover St Petersburg and other cities steeped in history of the Baltic Sea.

From Stockholm, embark aboard Le Bellot for a 9-day cruise, including 2 exceptional days in the former capital of the Tsars.

Your first port of call will be Tallinn, a site that was important for the Hanseatic League in the Baltic Sea around the 13th century. UNESCO Heritage Site, this once opulent city still has remarkably well-preserved ramparts, public buildings, merchant houses and warehouses.

Your ship will then head to St Petersburg. Architectural gems in the Baroque style, churches with domes so elaborate they seem otherworldly, palaces, gardens, canals, and the famous "perspectives" that criss-cross the city: at each street corner a new theatrical decor is revealed. We invite you to visit this colourful city where the atmosphere is rich with the splendour of the Tsars and the traces of the Russian Enlightenment.

You will also visit Helsinki. Located on a peninsula surrounded by almost 300 islands, the verdant capital of Finland will charm you with its Art Nouveau architecture. Next comes Gdansk, nicknamed 'the Golden Gate of Poland': an opportunity for you to dive deep into the fascinating history of a city that was once a significant trading port, and to discover the virtues of amber.

After this final port of call, Le Bellot will head for Copenhagen, your disembarkation port.

Elegant is the word that will come to mind.

As you take in the Danish capital’s rich history and traditions. With castles and crown jewels, galleries and museums, cathedrals and canals, the sightseeing ranks among the best in Europe.

The Strøget is a series of pedestrian-only streets which make strolling and shopping a pleasure. And be sure to visit Tivoli, a unique combination of picture-perfect flower gardens, lakes, theaters and restaurants with more than 100,000 colored lights.

Graceful design, imaginative architecture the Finns have long been admired for their beautiful buildings, gardens and parks. You’ll enjoy visiting them too, as you pass all styles of centuries past and present, from medieval to neoclassical, as well as the superb ultramodern creations by Aalto, Saarinen, and other Finnish masters.

Founded as a fortress in the 13th century, Stockholm eventually grew to become the capital of Sweden. It is a city of remarkable beauty with numerous parks, tree-lined squares and boulevards, and pleasant water vistas. To grasp the full character of Stockholm, visitors must hop from island to island, each of which boasts its own personality. Sergels Torg, a central square located in Norrmalm, serves as the focal point for modern Stockholm. On Helgeans Holmen, the tiny island
immediately south of Norrmalm, sits the Riksdagshuset (Parliament Building), followed by the medieval Gamla Stan (Old Town) island and then the large Sodermalm, a bohemian enclave in a former blue-collar quarter.

Across the Strommen (the Current) lie the two scenic islands of Skeppsholmen and Kastell-Holmen. Farther east, Djurgarden Island houses a number of city museums and connects to the northern Ostermalm, a pricey residential neighborhood that adjoins Norrmalm sprawling across 14 islands, the Swedish capital has always enjoyed an ideal
commercial location at the confluence of Lake Malaren and the Baltic Sea. As a result, a forest of high-rise office buildings and condominiums has grown up beside the medieval castles that once guarded Sweden’s strategic waterways. Founded in the mid-13th century, this former outpost developed into a vibrant capital in the 17th century, when landscapers and architects began to build elegant parks and squares that rivaled those in the finest European cities.

Today, picturesque Stockholm boasts a stunning combination of man-made gardens in its center and natural scenery on its outskirts, where sun-lit lakes shimmer in the pine-clad countryside.

The capital and largest city in Estonia, Tallinn is located on the Gulf of Finland, south of Helsinki, Finland. It offers an interesting blend of modern, Western atmosphere with well preserved medieval buildings, walls and narrow streets. It is very popular with artists and has numerous galleries, museums and cultural festivals.

1. The rates of our cruises are per person and include the following: All meals while on board the ship (from dinner on the day of embarkation to breakfast on the day of disembarkation) Captain’s welcome cocktail and gala dinner Mineral water, tea, filter coffee, a selection of white, red and rosé wines offered during meals; afternoon tea Evening entertainment and events Luggage transfer from pier to the ship and vice versa Room service 24h (special selection) English speaking lecturer on selected sailings. Water sports activities (except scuba diving) using the ship’s equipment, when permitted by local authorities and confirmed by ship Master according to safety and sea conditions onsite Open Bar (pouring wines, house champagne, alcohol except premium brands…list available upon request).

Any ground services before and/or after the cruise other than the ones mentioned in each “Cruise & Flights” package and for which details are available upon request.

Optional Spa package to be booked prior your departure; please ask for more information Optional shore excursions.
Beverages other than the ones mentioned.
Laundry services, hair salon and à la carte Spa treatments Personal expenses, on board medical consultations and drug prescriptions.
Gratuities (included only in cruise package sold in US/Canada).


Cancellation/luggage/assistance/repatriation/medical insurance(s) Visa fees, if applicable It is essential not to forget to bring with you your binoculars for a good fauna observation. Please do not forget to bring your medical certificates when it is required to participate in an expedition cruise.

Request A Quote Send To A Friend Have A Question? Contact Us

Send To A Friend